NSAC executive director Bob Bennett confirmed to ESPN.com on Tuesday that Jones, 27, tested positive for benzoylecgonine, a metabolite of cocaine. Jones informed the NSAC that he had admitted himself into a drug treatment center.

"Jones has checked himself into a rehab center," Bennett said. "And at this time, I would direct any further questions regarding his situation to Mr. Jones or the UFC."

The urine test sample was collected on Dec. 4 and analyzed by a World Anti-Doping Agency-approved lab in Salt Lake City. According to a lab report, results of the test were issued on Dec. 23. The test is considered out of competition, however, and according to WADA's banned substances list, benzoylecgonine is banned only in competition.

Because the test is considered out of competition, the result of Jones' fight against Daniel Cormier on Saturday will stand.

"We support UFC light heavyweight champion Jon Jones' decision to enter a drug treatment facility to address his recent issue," the UFC said in a statement. "While we are disappointed in the failed test, we applaud him for making this decision to enter a drug treatment facility. Jon is a strong, courageous fighter inside the Octagon, and we expect him to fight this issue with the same poise and diligence. We commend him on his decision, and look forward to him emerging from this program a better man as a result."

Through his attorney, Jones issued a statement to Yahoo! Sports apologizing to his family, including his fiancée and their four daughters. The upstate New York native, who now lives and trains in Albuquerque, New Mexico, is the brother of New England Patriots defensive endChandler Jones and Indianapolis Colts defensive end Arthur Jones.

"With the support of my family, I have entered into a drug treatment facility. I want to apologize to my fiancée, my children, as well as my mother, father, and brothers for the mistake that I made," the statement read. "I also want to apologize to the UFC, my coaches, my sponsors and equally important to my fans. I am taking this treatment program very seriously. Therefore, at this time my family and I would appreciate privacy."

Jones (20-1) is widely considered to be the best pound-for-pound fighter in the world. He defeated Cormier via unanimous decision Saturday at UFC 182. 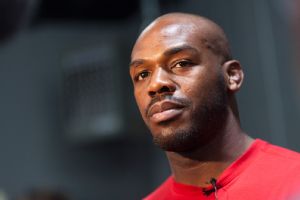 Aaron Sweet/Getty ImagesJon Jones tested positive for traces of cocaine and has admitted himself into a drug treatment center.

"I am proud of Jon Jones for making the decision to enter a drug treatment facility," UFC president Dana White said in a statement. "I'm confident that he'll emerge from this program like the champion he truly is."

"I'll be there for my friend through this challenging time," Gibson said. "I'll help him recover and do it for his family. Whatever he needs from me as a friend, I'll be there to support him."

Reebok, which signed Jones less than a month ago, stood behind him.

"We commend Jon for taking the necessary steps to address this issue, and we will support him in any way we can," Reebok said in a statement. "The status of Jon's relationship with Reebok has not changed."

In May 2012, Jones was arrested on suspicion of driving under the influence when he drove his car into a telephone pole in New York. He pleaded guilty to a misdemeanor and was fined $1,000 and had his driver's license suspended six months.

He became the youngest champion in UFC history in 2011, when he won the title at age 23. His eight consecutive title defenses rank third all time in UFC history.

ESPN.com's Darren Rovell and The Associated Press contributed to this report.